The Nazis and the Altar of Satan

In Revelation 2:12, we read about one of the seven churches, “the church in Pergamum …where Satan’s throne is.” The ancient city of Pergamum, or Pergamon, was the center of pagan worship in Asia Minor. The once-thriving city lay forgotten and in ruins till 1864 when German engineer Carl Humann began excavating it, finding one of antiquities’ greatest monuments, the Altar of Zeus. The altar was excavated and taken stone by stone to Berlin where it was reassembled in its own museum. The Turkish government agreed that the ancient foundation of the Pergamon Altar ─Satan’s Throne─became the property of Germany. In 1930 the Pergamon Museum was opened to the public.

A few years later, the Nazi Party’s chief architect, Albert Speer, was commissioned by the new chancellor, Adolf Hitler, to design the parade grounds for the party rallies in Nuremberg. Speer turned to the Pergamon Altar for inspiration. Using the altar as a model, Speer created a colossal grandstand, known as the Zeppelin tribune. In the following years’ mass rallies, Hitler descended down the steps like a tribune in ancient Rome.

Most of the Nuremberg rallies were held at night. The grandstand was surrounded with 150 searchlights and the light columns extended for a mile in the sky, creating the mystical effect Hitler wanted. This effect was known as the “Cathedral of Light.” Inside the rally grounds, thousands of Nazi Party members marched in torchlight parades. From the altar’s podium, Hitler mesmerized the crowds as they swore a “holy oath” to Germany. From 1933 to 1938 hundreds of thousands of Germans gathered at the Zeppelin field in September, but the 1934 rally captured the attention of the world, thanks to the film, Triumph of the Will, a propaganda documentary about Hitler and the Nazi Party. In the film, Hitler was portrayed like a messiah who descended down through the clouds to the faithful waiting for him below. The film was shown continuously for 12 years in Germany. After the film’s release, Hitler’s popularity skyrocketed so that more than a million Germans came to Nuremberg to hear his speech in the following September rally.

On that evening of September 15, 1935, Hitler announced the Nuremberg Laws. “The law for the protection of German Blood and German Honor was intended to begin the marginalization process of the Jewish people,” said Dr. Anthony R. Santoro (Professor of Christopher Newport University). The new laws stripped the Jews of their rights as citizens. Then the Reich citizenship law was introduced, stating that Jewish people in Germany were subjects of the Reich, but not citizens. 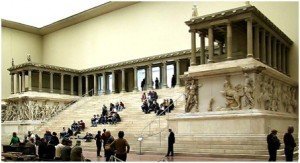 This historic background is provided to readers for the viewing of the January DVD documentary, “Jacob’s Tears” by Lance Lambert.
Click here