For people who changed the world through tolerance and peace

Over the last 3,500 years, few construction projects in the city have caused as much curiosity or controversy as this project. Set for completion in the summer of 2023, the Museum of Tolerance Jerusalem is a project of the Los Angeles-based Simon Wiesenthal center and museum. Its expansive 1,000-seat open-air amphitheater, theaters, a synagogue, cafes, a Grand Hall, and large communal spaces form a vibrant cultural center that serves visitors of all ages from throughout the region and the world.

The story of the museum began in 1993 when then-Jerusalem Mayor Teddy Kollek visited Los Angeles. He fell in love with the Los Angeles Museum of Tolerance and invited its founder and dean Rabbi Marvin Hier to build something similar in Jerusalem. When Ehud Olmert replaced Teddy Kollek, the city allocated the current lot to the Wiesenthal Center.

The design is based on Abraham’s tent being open on all sides and welcoming all populations─religious and secular; Jewish, Muslim, Christian, and others. The outdoor amphitheater is flanked by a Second Temple aqueduct at its base. It was discovered two decades ago when the cultural center’s foundations were laid. Inside, the center spans four floors with a central staircase flowing through the middle and a skylight that displays colored beams at night. In two lower levels, there is the Children’s Museum, which tells the biblical story of Moses; children’s classrooms; a 150-seat theater; and a small police station that provides the center’s security. (Website: www.museumoftolerancejerusalem.com)

One side of the diamond-shaped building’s exterior is composed of limestone imported from Portugal. The stones change shades according to the angle of the sun and are treated to repel graffiti. The side facing the Old City boasts the longest glass façade in the Middle East. The MOTJ opened in 2019, and it has hosted a few high-profile events. However, visitors are encouraged to come in summer 2023 when the project is scheduled to be completed. 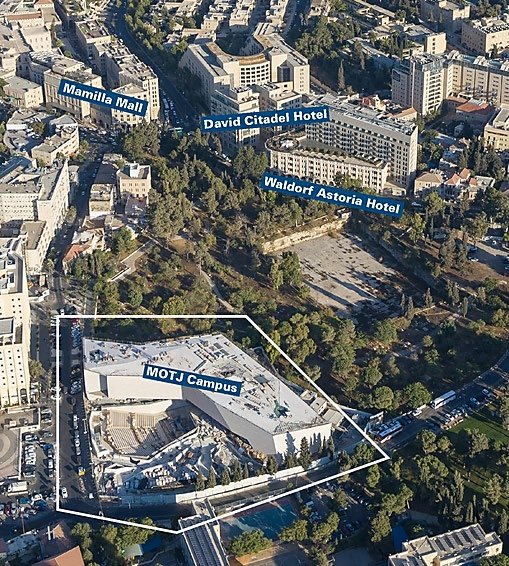 The location of the Museum of Tolerance Jerusalem