When Golda Mabovitch was born in 1898 in Kyiv, in the Kyiv Governorate in the Russian Empire, anti-Semitic pogroms were commonplace in her town. In her autobiography, Golda wrote that her earliest memories included her father boarding up the front door in response to rumors of an imminent pogrom. During those years, many Jews were wounded, Jewish property was damaged, and hundreds of families were financially ruined. Until the 1917 Russian revolution, the city became notorious for police “hunt attacks” on illegal Jews. Despite all this, the Jewish population grew from 50,000 in 1910 to over 81,000 in 1913, and probably, even more, evaded the census.

Golda’s father left for New York in 1903 to find work, and two years later, he moved to Milwaukee, WI for a better-paying job. A few years later, the Mabovitch family was united in Milwaukee. Golda’s first contact with Zionism came in the years when she lived with her sister Sheyna’s family in Denver, CO, where young people met for conversations about trade unionism, literature, women’s suffrage, and more.

After she married Morris Meyerson, the couple moved to the British Mandate of Palestine, where they joined kibbutz Merhavia in the Jezreel Valley. Their life was full of manual labor until the kibbutz chose Golda as a representative to the General Federation of Labor, the Histadrut. In 1938, Golda was the Jewish observer from Palestine at the Evian Conference, which was called by President Franklin D. Roosevelt to discuss the question of Jewish refugees fleeing Nazi persecution in Europe. 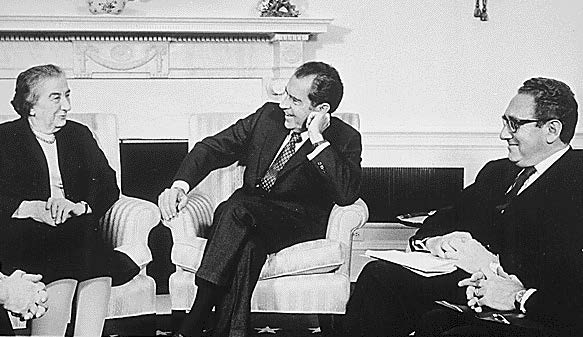 Golda was one of 24 signatories of the Israeli Declaration of Independence on May 14, 1948. In the following year, she was appointed Ambassador to the Soviet Union. At the time, good relations with the Soviets were important for Israel to secure arms from the Eastern European countries. In 1949, Golda was elected to the Knesset, serving as Minister of Labor.

In January 1966, Golda retired from the Foreign Ministry, citing ill health. After Levi Eshkol’s sudden death in February 1969, the party elected Golda as his successor, and in March 1969, she began serving as Prime Minister until summer 1974. Known as Golda Meir, she was the first female and the fourth prime minister of Israel.

During Golda’s years in politics, she was involved in navigating several domestic and international crises. She met with world leaders, was injured when a bomb was thrown into a Knesset chamber, praised the work of Pope Pius XII, fought for the Jews to leave the Soviet Union in the 1970s, and appealed to the world to condemn the Munich massacre of 11 Israeli athletes at the 1972 Summer Olympics.

In the days leading to the Yom Kippur War in October 1973, Israeli intelligence could not determine that an attack on Israel was imminent. They assured Golda that the situation did not cause an alarm, so she did not mobilize Israel’s forces for a pre-emptive strike. Following the Yom Kippur War, the government was plagued by infighting and questions over Israel’s lack of preparation for the war. In June 1974, Golda Meir resigned from the Knesset and never returned to politics. (Used online resources)

Golda Meir Memorial Plaque on the building where she was born in Kyiv.