30 AprFor the sake of brothers and friends

Your concern and giving were in action during the recent outreach to the Jewish refugees from Ukraine. CFI was given permission to visit the refugees and bring them relief packages. The events took place first at the hotel parking lots. Without you, we would not have been ready for such a sudden operation.

As more refugees arrive, the word about our Jerusalem Distribution Center is circulating among them. They currently arrive in the Center to receive assistance. Now also, other Jerusalem ministries are helping with several needs; however, Christian Friends of Israel was the very first organization to reach out to the refugees. We sincerely thank you! 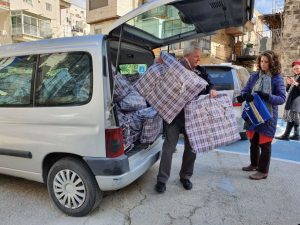 We are witnessing today a major aliyah, the arrival of immigrants in Israel. Ukraine may not be the only

country contributing to this wave this year. News already reports of numerous people leaving Russia. If the Russian aggression is not stopped, the Jewish people from the Baltic and other European countries may join in.

Ukraine is known as the breadbasket of the world and the fifth-largest importer of wheat. The war in Ukraine has taken this year’s planting season. As grain prices skyrocket, many poor countries already fear food insecurity, even famine.

In late March 2022, terrorist attacks in central Israel took the lives of eleven people, making the month the deadliest in several years. Two of the victims were guest workers from Ukraine. 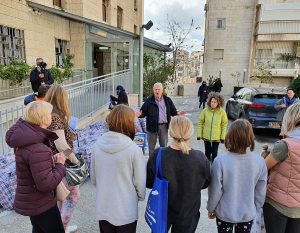 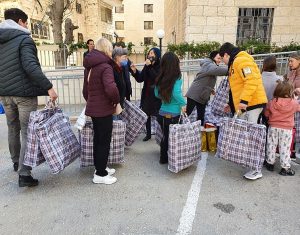 Meeting refugees (left) and your blessings in packages to be carried home (right). Photos by Tommie Coleman, CFI Jerusalem