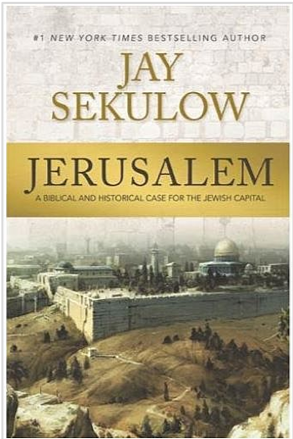 In his new book, Jay Sekulow presents a political and historical rationale for the existence of Israel as a sovereign nation. The State of Israel and its very right to exist is a lynchpin issue not only in the Middle East, but it is a critical issue to the world at large. The UNESCO aims to delegitimize Israel and entities such as ISIS, Hezbollah, Hamas and Iran, want to wipe Israel from the face of the earth. Here is a book that defends Israel’s right to exist. Sekulow looks at the legal case for its prominence, as well as the historical and political rationale as a homeland for the Jews today. He encourages readers to stand with him against the hatred, lies, and efforts to delegitimize one of the world’s oldest nations.

Jay Sekulow is widely regarded as one of the foremost free speech and religious liberties litigators in the U.S., having argued twelve times before the U.S. Supreme Court in the First Amendment cases. As chief counsel of the American Center for Law And Justice (ACLJ), he is a renowned constitutional attorney and an international expert on religious liberty. He is a member of President Trump’s legal team.