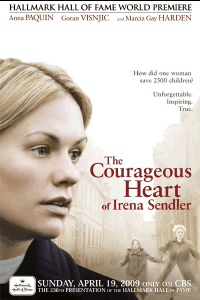 She was a mere wisp of a thing─ barely five feet tall─but she was a woman who defied the powerful Nazi machine and triumphed. Her name was Irena Sendler. She was a young Polish nurse who worked in Nazi-occupied Warsaw and risked her life to save 2,500 Jewish children from being deported to the concent-ration camps. Irena survived and came to be known as a “Righteous Among the Nations.”  D26