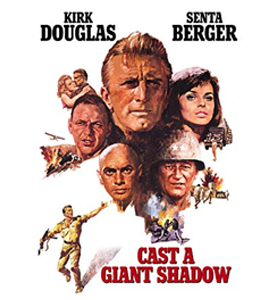 During the early phase of the 1948 War of Israel’s Independence (November 1947–May 1948), local Arab forces took control of the hills overlooking the road to Jerusalem between

"Cast A Giant Shadow" was re-mastered in HD in 2014. It powerfully dramatizes a part of Israel’s heroic struggle for independence. Originally filmed in 1966 with Kirk Douglas, Yul Brenner, John Wayne, Frank Sinatra, Senta Berger and Angie Dickson. Recommended as a historic drama.