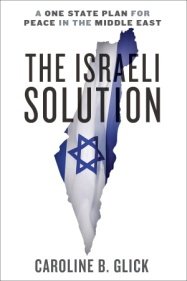 by Caroline B. Glick
Between 1970 and 2013, the United States presented nine (9) peace plans for Israel and the Palestinians, and for the past twenty years, the two-state solution has been the centerpiece of U.S. Middle East policy. But despite
this laser focus, American efforts to implement a two-state peace deal have
failed─and with each new attempt, the Middle East has become less stable, more violent and more radicalized.